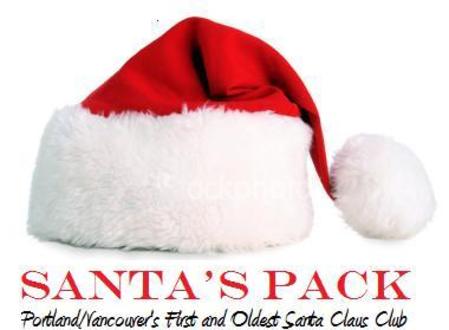 Meeting was held at Gustav's in VanCouver, Wa. All ordered off the menu.  Meeting began at 3pm. 13 were in aqttendance.  We had Santa Trevor Waltos and Santa Gene Sanders from NorPac Santas visit.
Trevor talked about Northwest Santa workshop at Great Wolfe Lodge in November.
Santa Dave talked about backround checks and the need to have one on file for all members and future members.  Santa Trevor and Santa Gene spoke briefly about NorPacs requirement of having one on file to be a member of their group.
We are still looking for a permanent Secretary,  Santa Ted Rusk will take minutes for this meeting and send it to Santa Dave.
We had some conversation about "Polar Expres"s in Washington and in Oregon, Hood River.  Some Santa's had difficulty getting paid.  Santa Trevor went to Bat for the Santa's to Corporate to get Washington's paid.  Santa Ted was the only Hood River, Or.  that worked the train and had been paid in full.  Santa Ted reminded them that if you work as a contractor they are the last to be paid.
We had some discussion about Name tags.  Santa Ted gave the information to Santa Jim.  It was discussed.  If you would like a Pin  See Santa Jim
Santa Dave said we had a treasure balance of $1349.49
Meeting was adjourned.

​Board Meeting at Country Café

Where:  Gustav's Pub and Grill

Santas Pack Executive Board Meeting 9:30 AM September 2, 2017
Location: Country Inn
Attendees:
Jim Hughes, Dave Cardiff, Jim Wood, and Ted Mach
Main Discussion:
New Santa Pack members can participate throughout the year but to access the Santa Pack website (the restricted portion) the individual has to be a member (this is mandatory).   The restricted part of the Santa Pack website will be password protected.
Should the Santa Pack have all “Santa’s” be a member of the International Brotherhood of Real Bearded Santas and sign the code of ethics?
Since we are too close to the new season it has been decided that for the 2018 Christmas season all Santa members will need to:
1.     Join the International Brotherhood of Real Bearded Santas (IBRBS)
a.     Current Dues are $25.00
2.     Have a background check performed on the IBRBS site
a.     With IBRBS membership the first background check is $5.00
3.     Bring a hardcopy of the IBRBS receipt – required to join Santas Pack
4.     Bring a hardcopy of the IBRBS Background check results - required to join Santas Pack
5.     Pay the Santas Pack dues of $20.00
Other benefits of being an IBRBS include Performance Insurance – lower rates.  There are two levels $2,000,000 aggregate (for $165) and $4,000,000 aggregate (for $200) both levels cover the entire year.
All IBRBS have to read and sign the Code of Ethics which will help Santas Pack.
This year’s membership (2017) is “AS IS” – another words no change from last year. Type your paragraph here.

Jim Hughes started the meeting with a discussion concerning an Emergency Santa List.  Several volunteers would be on this list for people who could not make their gig’s because something unexpected happened.  The list could be on a laminated card or on the web site.  If it is on the web site then the list should only be available to members.

Jim Hughes mentioned we need to have an agenda for the next meeting.

All present at this meeting introduced themselves and gave a short description of themselves.

Discussed the purchase of Name Tags for the newer members.  Need a list and then the name list can be submitted so that the name tags can be made.

Christmas Party – Patty was made the party coordinator.  She will try to get a place for the get together.  It was mentioned that Santa Pack may pay part of the dinner for each member.

Next Board Meeting will be on 11 November 2017 at the Country Café in Ridgefield, WA at 9:00 AM.Type your paragraph here.

The coming Christmas year is coming up and the Covid-19 will probably put a major dent in most Santa visits.  Many companies are cancelling Santas and their Christmas parties because any vaccine probably will not be available for this Christmas season.  All Santa’s who want to advertise Santa Virtual Visits then it is recommended that they put that on their Santa’s Pack personal description page.  At this time Ted Rusk, Mike Hyder, and Ted Mach are taking a Virtual Visits presented by Ed Taylor.  Welcome Santa is now Talk to Santa.  Gig Salad is looking for Santa Virtual Visits.  Looks like the video chats will be booming.  At this time not everyone in Santa’s Pack will be offering Virtual Visits.  If you want to update your member information that you are offering Virtual Visits then send the updated information to Ted Mach.  Mike Hyder’s information was not updated on Santa’s Pack and Ted will contact the web master.  Santa’s Pack will still require IBRBS membership.  The $20.00 dues for Santa’s Pack are still due between October 1 and November 7th which will help pay for the Santa’s Pack web page.  Background checks are still required.  Insurance is not a requirement to join Santa’s Pack.  We encourage you to purchase performer’s insurance for your protection.  Ted Mach will email Santa Pack members Bill Kerner’s address to mail their dues.  If you are planning to go out as Santa this year you may want to update your web page.

Update on Ted Rusk:  Ted Rusk about month ago the doctor’s tested his esophagus.  He had ten days of radiation.  He has started chemo therapy again.  He does not plan on any personal visits.